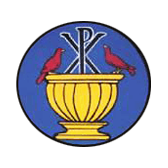 This picture is seen in the finest mosaic known before the Christian era. It is at Rome in the Capitoline Museum and has been described by Pliny. In the first century after Christ, Heron of Alexandria constructed the “heronsball” a globe on which two doves rested. About the year 300, a representation of this was painted on the wall of the catacombs of Praetextatus and of St. Soteris. It is found again at Ravenna in the tomb of the Galla Placidia. (A.D. 400) and on the altar at Rimini in the same century.

The meaning of this artistically pleasing and historically noble symbol points to the sacrament of baptism. This conception is justified by the monogram of Christ seen above the vessel because we are taught that we are batptized “in Christ”.

Certainly the early Christians saw in it a symbol of the Holy Eucharist, since grapes are often represented with it, and the vessel has the form of a chalice with handles. On an altar of the 6th century at Auriol and Vaison such a representation is found.

It may symbolize efficacy and the nourishment received from Christian teaching, because Origen teaches: “You are daily invited to come to the waters of the Word of God and Stand at his Well.”
It may also remind us of the waters of eternal life and the desire for eternal happiness.